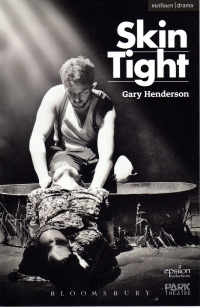 I ordered this book based on a theatre review on the Milwaukee Journal-Sentinel Web site.

Before we get into what I think of the book, I’m going to do a little aside about jsonline.com, and maybe Milwaukee in general. I remember when I was in school being amazed and impressed with how many concurrent productions you could catch at the Marcus Center downtown. In the height of the season, there were sometimes three or four different plays running at the same time in different auditoriums in the same building. Basically, it’s a multiplex of drama. Not including the other troupes down in south city or the smaller groups. Man, I went to a bunch of different productions my senior year, and I loved it–and I chastised people who were eager to leave Milwaukee after the university to go places with Culture. I lived in St. Louis, and I volunteered for a theatre group for a while and supported others, but it was nothing like Milwaukee. Of course, it could simply be that the theatre groups are scattered all over St. Louis, where the cultural scene in Milwaukee has a high density downtown.

Several times a week, jsonline.com has a theatre review, where someone puts in the paper–or at least its online version–a review of a local theatre company’s current production. This, too, differs from St. Louis. The St. Louis Post-Dispatch and its online equivalent don’t bother with covering its theatre groups. That fell to smaller free newspapers in the region. Of course, I can’t compare it to Springfield, which is far smaller than Milwaukee, nor can I compare it to the Springfield News-Leader, which is essentially four twenty three year olds with Journalism degrees retyping police reports and penning a column a week on their life experiences as journalists.

So I’ve been reading the theatre reviews on jsonline.com, as I said, and it’s made me excited for drama. And I read the review for this play, and I would not mind seeing it performed. So I settled for ordering it and reading it.

It’s a short play–the review mentions it’s an hour long, and that translates into 37 pages including production notes. The story unfolds in a stylized manner, with a man and a woman by a wash tub as they recount their lives together and their memories. Although it’s set in the fifties or sixties and in New Zealand, the themes stand outside the time and place–like it should in good drama and, frankly, art. It’s actually a pretty simple plot–this is a one act, after all–and it has some choreographed scenes that are but stage instruction in printed form.

So I enjoyed it. It, and the ever-present jsonline.com theatre reviews, certainly make me want to go see some drama on stage. After a couple such, I might be inclined to try my hand at writing it again.

Oh, and on a trivia note, this is not the first time I’ve reviewed a book called Skin Tight.