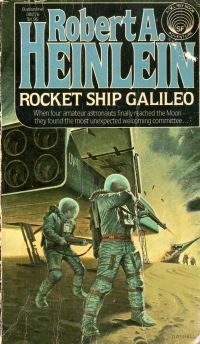 This book is one of Heinlein’s young adult rocket jockey pieces, the ones that made him famous and wealthy enough to do his longer, adult sleep-with-your-mother books later.

The book is set in the near future of its publication date (1947). A trio of high school seniors build a rocket in their back yard (roughly). It fails on launch testing, but their steady improvement has brought their attention to a government scientist, a sort of maverick, who happens to be the uncle of one of them. He has them join him in building and outfitting a real rocket on the cheap (government funds are tight, you know) and flying to the moon. When they get there, they pick up radio signals from someone who has beaten them to it… Nazis!

In the 21st century, the book is an artifact. Nazis have been played for fictional foils in the seventy years beyond their actual shelf life, but in 1947 and shortly thereafter, there must have been a real fear of redoubts of holdouts in places like South America. Going to the moon must have seemed like quite a dream. And high school students with that ability and interest? They must have been more common then.

The book depressed me a bit on the meta level. Here was young adult literature in America’s prime. Science lectures wrapped into it, reasoning skills emphasized, and every boy is a tinkerer and a good shot. Some kids who read this book probably went on to make the trip to the moon a reality. Meanwhile, in 2013, young adult fiction is all fantasy, vampires, and intrigues. Not what man can do, unless man is doing it to another man for some slight advantage.

One could argue that we’ve really lost something in how we entertain our young and what aspirations it leads them to. But one would probably waste one’s time.