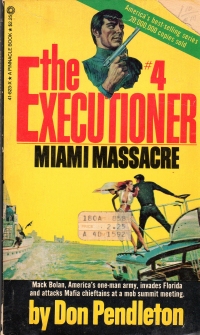 This book is a stunning departure from the series, wherein Mack Bolan….

Aw, who am I kidding? Mack Bolan hits a hard site in Phoenix and follows its bosses to a big deal meet-up in Miami, where the mafia heads are getting together to finally take drastic steps to eliminate The Executioner. He liberates a couple women who were under the thumb of the mob and shoots a lot of bad guys and perpetrates an audacious assault on a couple of hard sites. In other words, it’s a lot like the other books in the series.

What’s most interesting in these books is the evolution of the mythology and the beginning of the plot points that get resolved later. In this book, the Talifero brothers are introduced; they’ll hound him off and on for a couple of books.

The book also has a side plot where Bolan helps and is helped by Cuban counterrevolutionary guerrillas. How quaint. In 1970, perhaps that seemed like a possibility. In 2013, that’s a very dated relic.

At any rate, I pick these books up as filler or breaks from longer reading. I’m getting a little down on them, especially when it comes time to say something intelligent about them on the Internet, so maybe I ought to read something else for a while.