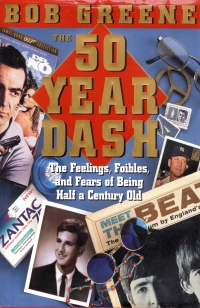 It’s been a while since I’ve read a Bob Greene book (five years, I guess, since I read All Summer Long, his novel, and He Was A Midwestern Boy On His Own, a collection of his columns). Wow. Five years. I remember reading them in my reading lair in Old Trees. When I had a fulltime job for The Man and a toddler and a baby on the way (or soon to it).

One can’t help but look backward when reading this book; whereas Greene’s normal fare wallows in a certain sentimentality, this volume looks at growing older and tries to weigh a balance between the things you gain when you’re turning 50 and the things you’ve lost. Well, the things Bob Greene gained and lost. And though he tries to balance it, he’s not a fan of growing older.

One cannot read the book without remembering the sordid story of his downfall. With that tone over it, you can see, yeah, he was a man who missed his youth and spent a lot of time missing it.

So here I am, a man of 40, reading this downbeat book and feeling a bit maudlin about it. Bob Greene writes about lifelong friends, people he knew in kindergarten. Me, I think back to kindergarten, and I can’t remember any of the other white kids in there, but there must have been some. As to lifelong friends, the friends I have don’t reach back to high school. Come to think of it, in England, you can sue for libel over charges like “This person is Brian’s friend.” Or start a fight. I’m not sure which.

Another thing struck me about this book as I read it: Bob Greene was married when he was writing the book, but the book nor what I remember of his columns ever mention his wife. He’s got little domestic scenes peppered through the book, but they’re always of him sitting down with a television dinner, a beer, and a basketball game or something. You’d be forgiven for thinking he was a bachelor. I don’t know what that’s about, but it didn’t exactly elevate the level of the book.

So of the Greene books I’ve read, it’s not my favorite. It took me a couple of seasons to read it, partly because the topical-by-chapter musings were meandering and disconnected, which meant when I hit a point where I’d had enough, I could put it down without really losing my place. So if you’re going for the Greene, go for one of his collections of columns and not this sort of thing. I’m not very encouraged by his Wikipedia page‘s description of his recent books, which sound more like this than his columns.