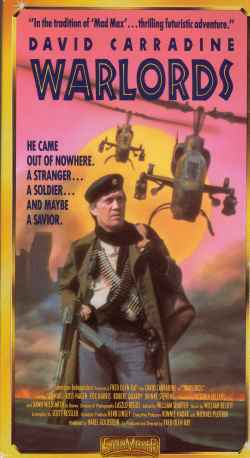 This film is a B-movie, direct-to-video piece from 1988 fit into those post-apocalyptic desert wasteland films from the era. It stars David Carradine in between his Kung Fu television shows as a clone warrior looking to rescue his wife from a Warlord who has arisen after the nuclear war. I’m not really sure why the film’s title is plural, as there’s only one warlord, really. The story is pretty simplistic and the whole thing smacks of being low budget, but that’s kind of what you get with the genre.

So I can’t help but compare this to Hell Comes To Frogtown, one of the standouts in the field and a film I felt affection for since seeing it on USA Network’s Up All Night in the late 1980s.

Overall, its effects budget, story, and whole bit are less than the gold standard that is Hell Comes To Frogtown.

But if you’re into the genre, it’s a fun little hour and a half.