This book is a short collection of tales from Ozarks lore, broken into categories such as “Tales of the Supernatural”, “Indian Tales”, “Treasure Tales”, “Outlaw Stories”, and so on. None of them are well-researched or well-documented, but they do give one interesting stories to tell the children and ideas for little essays and historical bits if one wants to put in the time to conduct real research.

The best bit about this book, though, is this written on the title page: 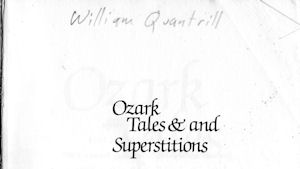