Growing up, I was always the scrawny, gangly, gawky nerd kind.  I had glasses since I was five years old, I lacked some basic motor skills, and I didn’t have much musculature.  So I only took the requisite gym classes and that was that.

Sometime in the middle of my adulthood, I started going to the gym.  In my middle twenties, I got hold of a weight set and pumped a little iron while I lived in my mother’s basement.  My stunning physique, or at least my physique and my knowledge of Objectivism and poetry, landed me a hot chick girlfriend who liked to go to the gym.  So I started.  But first I had to look around for some essential gymming gear.  And I had what I needed at hand: 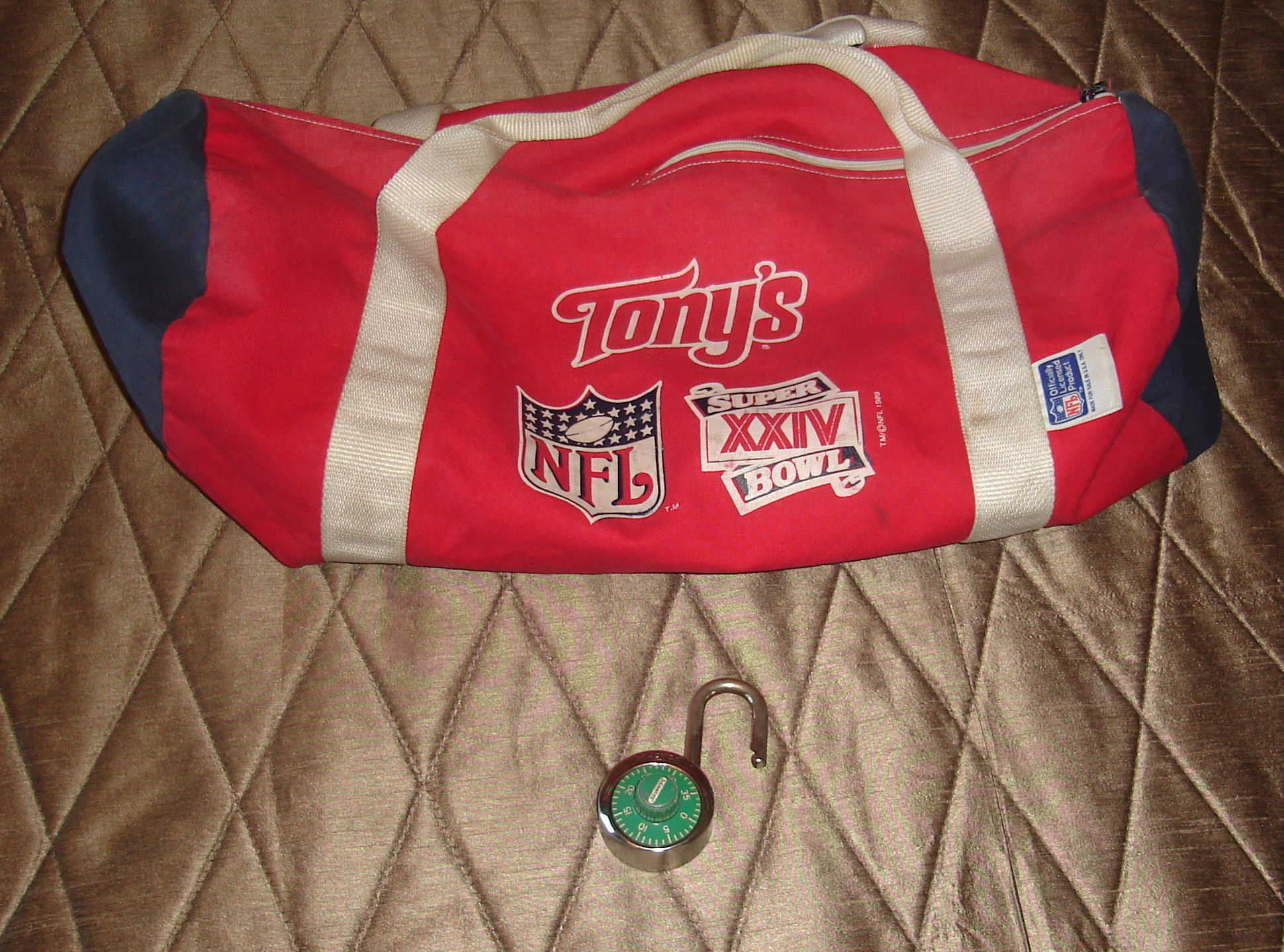 When I moved from my aunt’s basement in St. Charles, Missouri, to a mobile home in Jefferson County, I switched from a middle school that had gym in street clothes to a middle school that had a gym in gym clothes.  That meant I had to acquire a pair of blue shorts and a lock for the locker.  Coach Haug, the gym teacher, sold both, and for $5 I got this green-dialed lock.

It served me in middle school, in high school, and then got dropped in a set of boxes and/or drawers until I returned to the gym.  I’ve used it at the Mid-County YMCA in St. Louis County, the Edward Jones YMCA, Gold’s Gym, the Webster Groves YMCA, and now the Pat Jones YMCA.  It’s guaranteed to be the only green lock in the locker room, which means I’ll never lose my daily locker.  And I haven’t had to learn another combination in 25 years.

The gym bag isn’t that old.  As you can see by its side, it commemorates Super Bowl XXIV (24 in American).  I didn’t get the bag from the pizza company.  Christmas, 1990, was my freshman year in college, and I worked at a grocery store (Gold’s Shop Rite).  The Golds were known for their great Christmas party, and 1990 was my first (and only).  It was a snowy night in Milwaukee, as so many are in December.  Patti C (“Does the C stand for “Cakes?” I’d asked when she started) drove Shawn and I the five blocks to hall the company rented.  There, some dancing occurred, and an easily led young me performed the Worm for co-workers with the guys from Produce, who I thought were the coolest guys in the world when I was 18.  When I was 19, I was in Produce, and I was right when I was younger.

During college, I looped the handles of this bag through the back straps of my backpack and the two served as my luggage when I travelled by train between Milwaukee and Missouri.  Then it sat in a closet for a couple of years, brought out occasionally to supplement my luggage for travel between Missouri and Milwaukee.  Since I’ve gotten back to the gym, it’s born my clothes, the lock, gloves, and magazines exclusively.

Both of these articles are in good shape, as well as one could expect with fairly frequent use in infrequent bursts of fitness diligence on my part.  They’ve lasted me 25 and 20 years respectively; there’s really no reason why they won’t last another 20 or so.