In the first major change to cigarette packaging in a quarter-century, the Food and Drug Administration said Wednesday it will require graphic warning labels on packages, covering half the package’s front and rear. It will also require labeling covering 20 percent of the surface of cigarette ads.

The labels will feature either drawings or photos illustrating graphically the dangers associated with smoking and will be accompanied by text stating that smoking is addictive or that it kills. The pictures are not quite as grim as some used in other countries, but regulators hope they will be sufficiently frightening to keep young people from beginning to smoke and to strengthen the will of those who are attempting to quit.

From Troglopundit, here are what the new collectible packs look like: 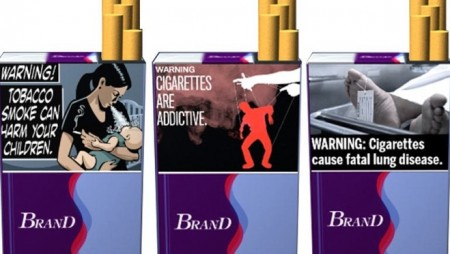 Althouse links to some other designs at the FDA Web site.

No word on the official Denis Leary commemorative tin packs which will be the real centerpiece of the campaign.

Back in the old days, cigars and whatnot came with baseball cards. Now they come with collectible government propoganda.

As I said in a comment at Trog’s, there is a certain remarkable consistency in thought here: our Betters in Washington are sure that the proletariat have not modified its behavior according to the Betters’ wishes simply because the Betters have not effectively explained the Message to the proles.