But a couple weeks ago, it started making metal-on-metal noises when running. We had to replace our three-year-old washer (bought new when we moved into Old Trees) when it’s agitator passed from this life to the next. A repairman who came to check its pulse said that modern washers and dryers have a lifespan of about seven years. So when the dryer started making noise, I warned that we were going to have to spend money on it before long.

A couple times in the recent past, I’ve opened the dryer to find it full of dry clothes and the timer set to the start time. Sometimes, we loaded the dryer and saved its run for naptime or children’s bedtime to introduce some white noise while they slept. We’ve been doing this since Old Trees, when the dryer lie between their bedrooms and the rest of the house. We hoped the white noise woud mak the noises we made elsewhere. At any rate, I found the dryer had not run and assumed I had failed to start it.

However, one day, I started it at naptime, and it stopped post-haste. I tried it again, and it started again and stopped. I wondered what could cause it. A clogged dryer vent? I went to the south side of the house, where a vent opens right next to our air conditioner (I’d joked with the home inspector, “May the best appliance win!” because warm air blowing out on a running air conditioner makes the air cooling less efficient, but the joke is less funny when you explain it even if the explanation lies in the same set of parentheses as the joke itself). I went out and opened the vent to take a look in, and the vent cover, one of the little louvred vinyl jobs, opened on a 2 inch PVC pipe. That’s odd, I thought.

And then something dark appeared out of my nowhere and hit my knuckle, causing a great disturbance in my pain-free morning. What was that, I wondered? Biting horsefly? Spider? The rest of the hive of wasps that had been hiving in my air conditioner’s casing came out to answer my challenge. So as my middle finger swelled (all the easier to see when displayed, bonus!), I got a can of waspicide and went the whole Anakin on them (I killed them. I killed them all. They’re dead, every single one of them. And not just the men, but the women and the children, too. They’re like animals, and I slaughtered them like animals. I HATE THEM!). After which time, using the dryer-starting talents of my wife, I deduced that the vent was blocked since no air was coming out of it when she turned it on.

I paced a bit and determined that since we were going to get a new dryer anyway, we should just go and get one that afternoon for delivery the next day. I cannot even dramatically recreate my thinking for you; I was not utterly convinced that the vent was the cause. So we dropped $600 as though we were still DINKs (I even bought the extended warranty given how well our last washer did).

The next morning, the appliance guys came along, put the new one in, and loaded the old one in their truck. I realize I have enough land these days to expose plenty of appliances and derelict automobiles to the elements, but I’m starting slowly to easily acclimate my suburban and sophisticated spouse to the practice. After the appliance guys hooked it up (yeah, I let them do it. One fewer man point for me), I started it and let it run for a couple minutes. The appliance guys left, and I started in on the drifts of laundry that had accumulated in the two days.

When a load finished and was wetted for the drying, I turned on the new dryer and…. it stopped.

Dammit, I thought, it is the vent.

So I checked the vent from the interior. It looked like standard ducting and wasn’t really coated with much lint even though it was a couple of ninety degree turns coming out of the laundry alcove. I went to the utility room in the basement and tried to find the duct that carried the venting from the dryer alcove to the exterior and didn’t see it. What I did see, on the other hand, is that the built-in vacuum was right where the dryer duct should come out and…. Oh. That would explain it.

So I didn’t know where the dryer vent came out and I was at a loss for action. After some thoughtful pacing, I called a company that could clean out dryer vents. That should fix it for me.

Fortunately, the dryer vent company spokesman worked me into his schedule at the same time as my wife was loading the children up to go meet her mother for lunch for my wife’s birthday. The dryer vent guy located the vent in the sill board immediately underneath my deck. So it’s been blowing hot, wet air on the underside of my deck for the entirety of the deck’s existence. Awesome.

My wife finished her child loading and left. The dryer vent guy tapped on the back door with a mournful look on his face. “I can’t clean your vent,” he announced. “It’s not metal ducting, it’s plastic that’s deteriorated. I can show you if you want.”

I looked. It was plastic venting hose stretched under the finished ceiling in my den. Breaking down. 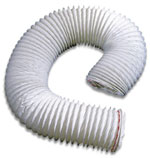 Swell. This isn’t the first time I’ve seen plastic where metal should be on really important functions in the dream home.

The dryer vent guy, who works for an HVAC company, said they could probably tear out 20′ of my ceiling and replace the ducting for $300-500. Of course, they’re not carpenters, so they wouldn’t replace the ceiling or match its paint, natch.

I said, you know, I can just get an interior vent.

You know, those have drawbacks. Humidity and it’s very dirty, he said.

We lived with one of those in Old Trees for three years since that particular rehabber didn’t bother to vent it at all, much like he didn’t bother to install any phone jacks or even hook the telephone line onto the correct interior set of plugs at the exterior phone box ($125 for AT&T to come, diagnose, unplug, and plug in correctly in a manner of 10 minutes). He also charged me $50 for coming out, climbing a ladder, and pointing a flashlight into my dryer vent.

And took fifteen minutes to write up the invoice. I’d thought I could make it to the restaurant to eat with the family, so I called and discovered they weren’t there yet. I was planning to join them, I told the restaurant, could my party call me when they arrived? So I changed clothes and whatnot and realized that I could only get to the restaurant 30 minutes after they sat down, probably, and they hadn’t called, so I assumed they didn’t get the message after all.

So I raced into Republic to buy an interior vent and raced home to beat them back. I did, and I beat the rain, which is good because the old pick-up’s windshield wipers manage to miss the portion of the windshield directly in line of sight for the driver. I put the interior vent on easily–lots of experience with them, you know–and turned the dryer on. I wandered off and….

The dryer stopped, of course.

I was through pacing at this point. I was onto gibbering.

And then my wife called from the restaurant. Of course they’d gotten the first part of the message but not the second. Still, an hour later, they had ordered and had eaten. My beautiful wife ordered something for me, too, and brought it home. Which is good, because at that point I could not have verbally communicated to a server that I needed a glass of water.

The next stop: calling an electrician. The next morning, one arrived and examined the outlet. Then he examined the outlet more closely. Apparently, a loose connection within it was causing it to lose power when it warmed up or when the dryer vibrated it apart. Either way, $100 and a new outlet later, and the dryer works.

Actually, that makes it sound so simple. The actual arithmetic is: One wasp sting and swollen finger, $600 for a new dryer, $50 for a $500 dryer vent replacement, $14 for an interior vent, 20 minutes cleaning up after the interior vent blew lint all over for a couple minutes, $100 and a new outlet, 1500 words on the blog and lots of long retellings with hand gestures, and new innumerable fears about what other dangerous and hidden shortcuts were taken in the course of building this house later, and I can dry laundry now.