On the day of Atari Party 5.2, I convinced my beautiful wife to come to a couple garage sales. I don’t know why she agreed, as we were holding a large party that evening and anyone who cares about others’ impressions of her domicile would have been stressed about the “presentation layer” of the home, and she doesn’t even like yard sales.

But came she did, and it was wise that she carried the bankroll. Because I encountered a deal. A Commodore 64 C in a refurbisher’s box with the Commodore 1541-II disk drive for $25. I looked it over; no software, even though GEOS was supposedly included (for you damn kids, Graphical Environment Operating System was a graphical operating system, a la Mac or Windows, for the C64). At $20, I would have snapped it up, but since it broke the double-sawbuck territory, I couldn’t do it.

As we were in somewhat of a hurry (the Atari Party had a scheduled start time, and we did have some interface tweaks to perform on Honormoor, the Noggle estate, before the party), I didn’t even pause to offer a single sawbuck. Besides, I already own an original C64 with a working 1541 drive. So I couldn’t justify the expense to my wife, although perhaps if I had the cash in my wallet, I could have.

So we got home, and I wanted to hook up a Commodore 64 for party decoration. Sadly, that’s all it’s become; the party goers don’t tolerate the load time on the 1541, we discovered in Atari Party IV, when we connected a Commodore 64 and preloaded Castle Wolfenstein; after the first death and reload, the party members wandered off while the old machine spinned. But I wanted one hooked up for Atari Party 5.2, since we had space for it and we have a monochrome monitor for it. When I opened the cabinet where we keep the Commodore 64, but never the Commodore 64 C we passed up, I realized I might have a problem: 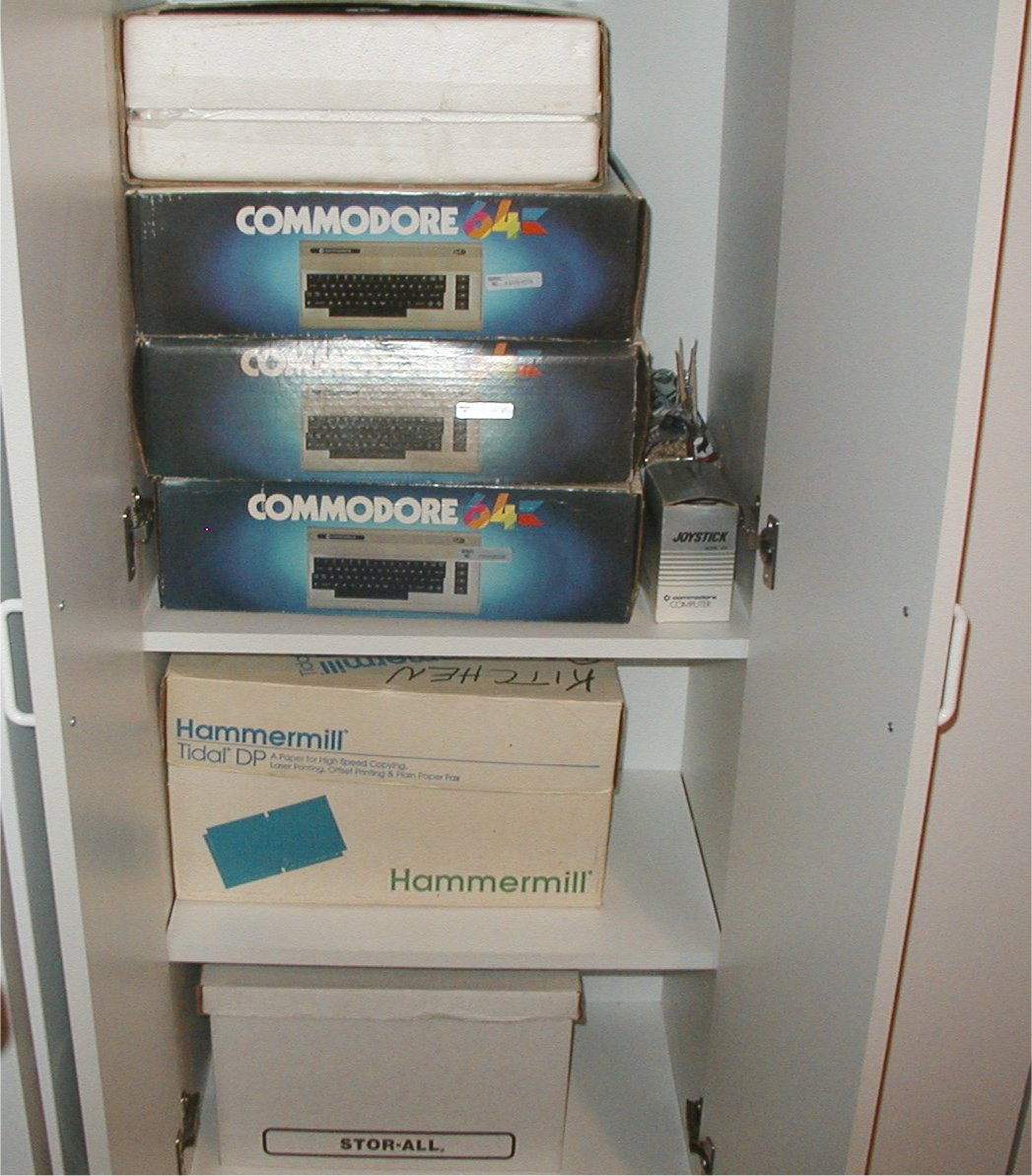 I already own five Commodore 64s, including the one I took to college as my primary computer (a gift from my mother), and three in their original boxes.

Ladies and gentlemen, I am an old computer hoarder.

Whenever I find an old computer at a garage sale or an estate sale at a reasonable (or irrational) price, I must buy it. I’m not talking old IBM clones whose processors I’ve made into geek-amusement magnets, I mean old 1980s computers.

Most of these machines, not to mention my 4 Nintendo Entertainment Systems and 5 or so Atari 2600s and 2 Sega Geneses, languish on my closet shelves for 364 days a year or, in some cases, for 729 days every two years. I want to own these machines because I don’t want other people to throw them away.

I am an old computer hoarder.

Admitting this is the first step in receiving help. I know that now.

7 thoughts on “Admission of Problem the First Step to Recovery”