Wow, it’s been almost three years since I read N-Space, the collection to which this book is billed the sequel. How do you get a sequel to a collection of short stories, snippets, and novel excerpts? Beats me, I am not a marketing flack for a publisher.

Like that book, I didn’t care for this book too much. For starters, it pads the nearly 500 pages with excerpts and scenes from novels (a disturbing number of which I have already read). It offers a number from his Warlock series, which I haven’t read and might have to look into. Other than that, it dabbles mostly in the Known Space arena.

It did, however, allow me to put my finger on one of Niven’s flaws: his books are best when the science isn’t actually a freaking character within it, particularly the one that speaks most. The later Ringworld novels fell into this trap, as did one of the stories in this book (“The Borderland of Sol”) whose only purpose was for Niven to noodle about the conceit of a quantum blackhole. The narrator is a space adventurer who follows along with Carlos Wu, father of Ringworld‘s Louis Wu, as they uncover a scientist engaged in piracy. The bulk of the story is Wu knowing the science of what’s going on and not spilling it until they’re in the pirate’s lair, where the pirate scientist gives a lecture on quantum black holes.

The nonfiction bits talk about how much Niven likes to deal with the hard sciences and that, in one of the many science fiction convention memories he treats us to, he and a group of artists and writers got a conference room set aside so they could create a world, including the topography, the aliens on it, and their culture. They worked in the room for the whole convention, and that was it: people putting together a world. Niven was surprised that more fans didn’t stop by to see this riveting action as artists created the images, writers wrote up the prose, and everyone brainstormed without a freaking story.

Niven, apparently, lives for this stuff, but readers don’t necessarily. Ergo, this book is okay for real Niven fans, but casual science fiction fans should probably stick to the real novels or the real collections.

From the story Fake FedEx Trucks; When the Drugs Absolutely Have to Get There:

An alert agent recognized that the “H” in the van’s serial number is a letter used only on U.S. Border Patrol Jeep Wranglers. It should have been a “P.”

One suspects that the story would have been almost as informative without the clarity that’s only useful to smugglers.

Now, how about some Pantone colors for the fake logos, ABC? What, are you holding something back because the Bush administration censored you?

Do you get the sense that if the roads were less safe, more money would be needed anyway?

Come on, everybody play “Think Inside The Bureaucratic Box”!

That might include me, but on further reflection, I somehow was filling out a St. Louis City paper ballot; I know because I voted against its half cent tax increase for practice.

I voted this morning, about 9:30, about the 98th person at my polling place to use the scanned paper ballots instead of the touch-screen voting machines. I took the piece of paper because I’d planned to write in the name of my favored candidate, a man who has since left the race, Fred Thompson.

The current front runners of the party, Romney and McCain, are not my first choice. Nor my second choice. Nor, really, men I would choose at all if given any good field. Romney signed MassCare (Google asks, “Did you mean Massacre?”). Romney promised auto workers that he would save the auto industry. I mean, Romney isn’t what I’d call a conservative.

McCain, now, I liked him well enough in 2000, before I knew much about him. I even forgave him for earnestly supporting McCain-Feingold because I thought his heart was in the right place with his intentions, but I didn’t think the law would prove “Constitutional” (the difference between Constitutional and “Constitutional” lies in the difference between my opinion and that of the swing vote of the Supreme Court). However, it did, and ultimately the better I got to know McCain, the less I liked him.

I would have voted for somebody else, anyone else, when I got to the polling place. Instead, I hoped to write in the name of Fred Thompson to indicate my displeasure with the ruling mass of the Republican party that its calculus that weights “electability” (that is, how positively enamored the media coverage of a candidate is) over substance (that is, reason, individualism, and capitalism tempered with individually-motivated charity that make up the American psyche, or what I always hope is ultimately would prove to be the American psyche).

I wanted to let the Party and its new ruling locus back east understand that they weren’t speaking for me, that I would go outside the established paths they chose for me and would actually write in the name of a Federalist, a man laden with gravitas, and someone who I think exuded sincerity and down-to-earth belief in himself and the aforementioned tenets of American society.

Of course, between the two evils vying to be the lesser of the two evils on the ballot in November, the current leader McCain varies from all that I think is good in politics more than the other guy, and a vote for a who has no chance is really a vote for the front runner. That is, any vote for anyone other than the guy in second place is irrelevant. And I didn’t want McCain to win, did I?

Brother, that argument that my opinion is irrelevant doesn’t work if you’re trying to bring me to inflate your relevance. I know that I differ from the bulk of the party, and this primary offers me the opportunity to remind you just how much.

I was going to write in Fred Thompson, but his name was on the ballot. Good, that means that people who feel almost as fervent as I do but are lazy might take the opportunity to send the same message that I did. I filled in the circle and scanned it in, leaving a paper trail in case of voting irregularities or whatnot and a record that I stand apart from the direction this party is going, down the slippery slope into disconnection from me, if not its base.

On Friday, I shoveled nine inches of snow off of my walk and driveway.

Today, it was seventy-five degrees and the snow is all gone.

You cannot really explain that to someone who hasn’t lived in St. Louis. 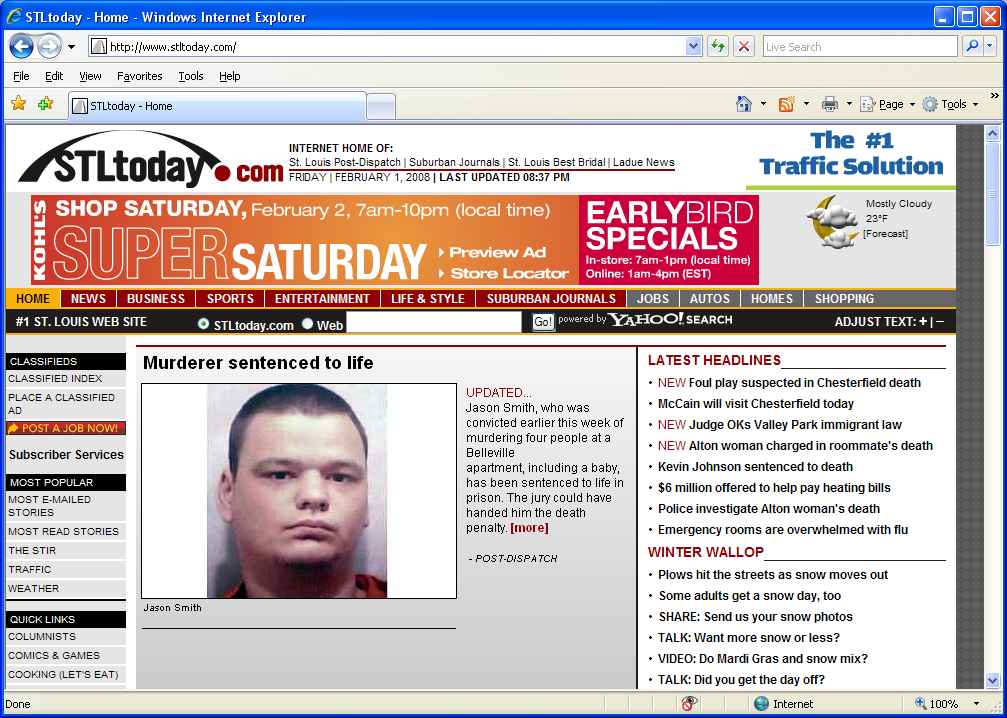 I’m beginning to see a sordid pattern in the behavior of our elected officials and their visits to the Midwest.

Ships have been dispatched to repair two undersea cables damaged on Wednesday off Egypt.

Someone said boat anchors were doing it. Doing it effectively, I would say.