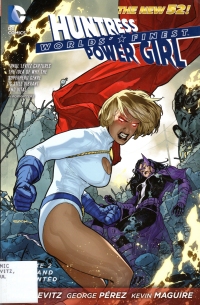 I’ve been reading DC comic books that I bought at the most recent Friends of the Springfield-Greene County Library book sale. I was saddened to find that I spent more than a dollar each on the issues on half price day (because they were priced at over $2 each inside the front cover). So I read a disconnected set of Jack Kirby’s Fourth World (by John Byrne no less). Which was kind of a good primer for this graphic novel which collects six issues of recent Worlds’ Finest comics with Huntress and Power Girl.

Well. For those of us NOT keeping up: In the middle 1980s, DC consolidated its comic book universes in a limited series called Crisis on Infinite Earths. One of the net results of this was that some of the heroes from other versions of Earth were on our Earth. Or other Earths. Just not an infinite number now. Or something.

In this case, we have alternate Earth versions of The Huntress and Super Girl (Power Girl) who are looking for a way to return home. Within this set of comics, they investigate and fight the minions of a rival technology company who is supposed to be dead.

To be honest, it’s been a couple weeks since I finished this book, too, so that’s about all I remember. Except that the science minion of Darkseid makes an appearance from Apokolips. Who I recognized because I’ve been reading Fourth World.

So it’s not selling me on DC over my preferred Marvel. Of course, I didn’t really get into the X-men titles or Fantastic Four when they got to fiddling with the timeline and alternate versions of comic book heroes. I prefer simpler stories, which is why I read paperback men’s adventure novels. So there you have it.