Recent discoveries lead me to believe that McGehee, of Yippee-Ki-Yay, might be a commie cyborg sent from the past. For instance, the following photograph, faxed to a Killian, Texas, Kinko’s in 1948 would support this hypothesis: 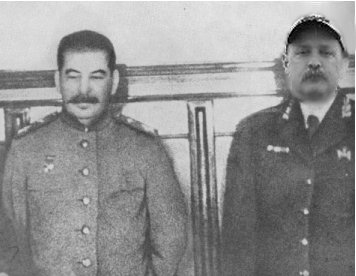 Apparently, the Reds knew their way of life was doomed after World War II. Using a time machine, they sent a cyborg into the future to…. Well, let’s not dwell on the finer lines of the plot. However, let’s look at the evidence that McGehee might very well be that cyborg:

Keep in mind, this is just a theory. Why, some would even say the photograph is faked, to which I would respond….perhaps the Russkies did that on purpose for disinformation. We’ll never know.

1 thought on “McGehee: Commie Cyborg from the Past?”